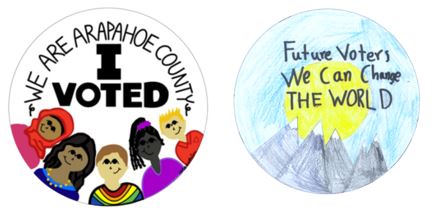 Stickers to be used in Mail Ballot Packets, Distributed at Voter Service and Polling Centers 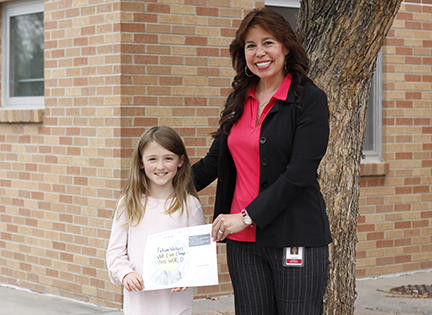 Lopez thanked all of the students, parents, teachers and school district personnel who encouraged students to enter the contest and submitted entries. Regarding the winners, Lopez said she was impressed by both girls’ participation in the democratic process at a young age.

“We hoped the contest would give students a chance to learn about the elections process and express themselves creatively, and they really came through,” said Clerk and Recorder Joan Lopez. “We received so many thoughtful and beautiful designs our judges had a difficult time narrowing them down to just two winners.”

Marchetti, 8, helped her father, Chris, knock on doors for city council candidates in a recent election. She wanted her design and message to encourage young Coloradans to appreciate the power of the ballot.

“I was thinking about how people should vote and that if more people vote it can actually change the world,” she said. “I also thought that since Colorado has a lot of mountains I should put in the mountains.”

Seier, 16, is vice president of the Junior Leader Council in the Arapahoe County 4-H program. Her design features multi-racial County residents, she said, to express that elections are a powerful way to give marginalized communities equal access to government.

“I was just trying to show the diversity of the County and especially of Colorado,” Seier said. “Diversity, to me, means we all come together as one to achieve common goals and make the world a better place.”

Marchetti’s sticker will be handed out at events and voter service and polling centers. Seier’s will be included in all mail ballot packets sent to voters for the Coordinated Election on November 2. 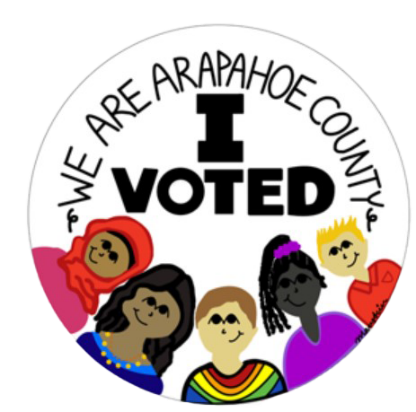 The “Future Voter” sticker contest was open to elementary students, while middle and high school students competed for the winning “I Voted” design. All County Elections Division employees voted for their favorite entries via a secret ballot with the students’ and schools’ names removed.

Lopez praised both winners for their creativity and inspiring messages.

“Diversity is one of the County’s values and I couldn’t think of a better image to demonstrate that than Mary’s,” she said. “And I loved meeting Vivian and learning how engaged she already is with the democratic process. It’s a wonderful thing to see young people envisioning a brighter future for our democracy.”